I had some concerns regarding JavaFX security. You know, if you go to JavaFX samples page, most of them are self-signed and you have to give them all permissions to be able to run them. I didn’t like it at all. On Devoxx I asked few guys from Sun about it and their responses were not clear. So I have decided to do few experiments to find out how it works. It’s nothing new, it’s similar to the way applets have worked all the time. But who remembers how applet security works?

Now every time user clicks on the “next” button, the applet attempts to write to a file in user home directory. It can be both a malicious code or a legitimate action. There is no way to tell them apart. That’s the reason why we need some security mechanism.

So if you don’t need to do anything dangerous and you are happy to play in the sandbox, unsigned application is the best choice.

Selfsigned application
Example
Most of the samples on JavaFX page are self-signed. It means that the JAR is signed by a certificate that is not verified by any certification authority. In my opinion, that’s the worst option you can choose. You force the user to answer following security dialog.

Signed application
Example
We can sign the application by a certificate that is validated by a CA. I have used Thawte Freemail Certificate. Sounds trustworthy, doesn’t it? If you open the example, you will see following security warning. 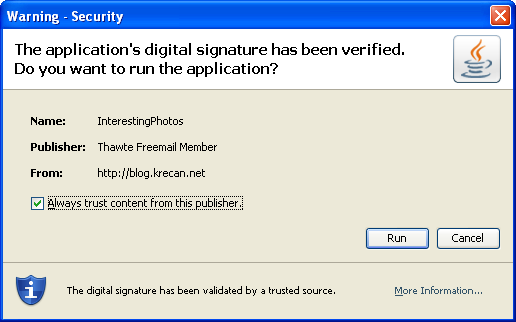 It looks less threatening than with the selfsigned certificate. It looks less dangerous. The “Always trust” check-box is even checked by default. But in fact, it’s not much safer. It is more complicated to generate such certificate but anyone (even me) can do it. It might be even more dangerous. Everyone who is able to generate a certificate that is validated by the same CA will be allowed to execute the code (if you leave the check box checked). And again, it is all or nothing choice. User can either give the application all permissions or do not run it at all.

Unsigned application with signed JAR
Example
In case you really need to do something potentially dangerous and you do not want to scare the user at the start of the application, you can use signed JAR in an unsigned application. Basically you can put all the dangerous stuff into a jar and sign only this jar. Most of the code can live in the main application which is unsigned. This way the application will start as unsigned and when you attempt to execute the dangerous parts the signed jar will be loaded and the security warning will be shown. In our example the application will start and the security warning will be shown when user clicks on the “next” button. At least that’s how it works on my machine. And I like it. This way user can use my application and is notified only when the application needs to do something insecure. And even if he decides that he doesn’t trust me, he can still use the application. (This idea came from a guy from Sun, unfortunately I don’t remember his name, thanks anyway)

To reiterate, the most secure choice is to write a JavaFX application that does not need any security permissions. If you do not sign it, it runs in the sandbox and everything is fine. If you need to execute some dangerous code, you have to ask user for a permission. Which is good, but users should be instructed that they shouldn’t execute any Java(FX) code if they are not sure what it does. So there is a possibility that they will not execute your applications because they will be afraid to do so. I can imagine that in the next versions of JavaFX there will be a signed library provided by Sun that will contain operations that are potentially dangerous but that are in fact safe. Like opening a file using “Open File dialog” etc.

Disclaimer: I am server-side developer, I know nothing about client-side Java, so do not be surprised if something I have written here turns up being wrong. Just correct it in the comments. Thanks.