In recent weeks I have been working with Arjen Poutsma on a brand new testing support for Spring Web Services. At least Arjen has been working, I have been just generating crazy ideas and he kept explaining me why we can’t use them.

But it was quite interesting experience and I have learned a lot about fluent API design. Since it was my first fluent API and I am not an API expert, please take everything I mention here with grain of salt.

The task is simple. We need a way how to configure a mock. This mock has to validate that requests generated by our application are correct and after that the mock has to return some response. We want to write something like this:

Computer, when someone is trying to send a request, verify that the request contains value “a”, has header “header” and then respond with value “b”.

The requirements for the API are following:

In the next part, I will try to describe several variants of the solution, each of them fulfilling the requirements differently. Please keep in mind that the code is simplified, it focuses solely on the API, not on the implementation. Moreover, the classes have been renamed to show what their main purpose is.

All characters appearing in this work are fictitious. Any resemblance to real persons, living or dead, is purely coincidental.

code
The first variant is based mainly on interfaces. The test itself looks like this

There is one entry point, class Mock

It just returns an internal class that implements RequestExpectations interface.

All methods of this interface return ResponseActions interface

Please note that and() method allows chaining of request expectation.

This API is really IDE friendly. Code completion works like a charm. It’s quite simple both from outside and inside. But this API has one big flaw. It’s not extensible. Imagine that we would like to add an expectation that verifies a digital signature. We would have to add a method to the RequestExpectations interface. It is not possible neither for third parties nor for us, since this change would break backward compatibility.

code
We can split the functionality and allow others to provide their own validators and response generators. We just have to change the interfaces

Now we have made the API extensible, but we have to provide an easy way how to create RequestMatchers and ResponseCallbacks. One way how to do it is a statically imported static factory.

Such API is also fluent. It even resembles EasyMock API. The issue here is that code completion does not work as well as before. In Eclipse you have to type first letter of the method name before Ctrl+Space starts working. In Idea you have to press Ctrl+Shift+Space. But the advantage is that everyone can provide their own factory and extend the library seamlessly and consistently.

code
We can go event further. We can get rid of RequestExpectations interface, remove Mock class and do statically most of the stuff. The test can look like this

It’s simple and elegant. We even got rid of the strange and() method. The downside is that we usually have to use some ThreadLocals internally. But it looks almost like EasyMock. Cool.

code
Some people (like me) do not like static methods. It does not feel right, it’s not object oriented programming. Can we do something similar, but dynamic? Yes, we can.

We just have to use inheritance. Just delete static keywords from the methods in StaticFactory class. We will also rename the class itself because it’s not static any more.

The downside is, that we have to extend our class from MockFactory. Sometimes it’s not possible. No problem, we can use a trick I have seen in Apache Camel DSL.

It’s not as elegant as the direct inheritance, but it works. If we are brave enough, we can even use a closure.

(I bet you did not know that Java has closures already).

So I have shown you four variants, which one is the best? I do not know, each of them has it’s pros and cons. I personally like the last one the most. But the super static variant is not bad neither. Or the static? Or some mix between them? Some other? You have to make your own opinion.

Recently, I have been playing with Spring WS with WS-Security. I just want to write down how it works. Do not except anything special, just simple example of basic security operations.

We want to implement both client and server side. The client will sign the message, encrypt some part of it and add a timestamp. To make it more complex and real-life like we will sign the message using private key with alias “client” and encrypt the message using public key called “server”. Server will validate that the request is valid and will just sign the response using his key called “server”. Please note that I have picked Wss4j implementation because the configuration seemed to be easier than Xws.

It’s easy to do configure client interceptor like this.

As you can see, there is nothing special. We just define which actions to take and properties. The only confusing part is, that key alias is defined as “securementUsername”.

Whit this configuration we will get following SOAP message.

To configure server, you have to define Spring WS server interceptor like this (full example).

No surprise here neither. The response will look like this.

As we have seen it’s possible to configure WS-Security without much hassle. To learn more, visit the official Spring WS reference. You can download full example here.

Last few weeks I have been working on one of my pet projects. Its name is Spring WS Test. As the name implies, its main purpose is to simplify Spring WS tests.

Again, I am scratching my own itch. I am quite test infected and I have needed something that allows me to write functional tests of my application without having to depend on an external server. Until now, you basically had two options. This first one is to test WS client application using plain old JUnit together with a library like EasyMock. But usually this test are quite ugly and hard to read. Moreover this type of tests does not test your configuration. The second option is to create a functional test that calls an external mock service. But this solution requires you to have two JVM, its configuration is complicated and error prone. 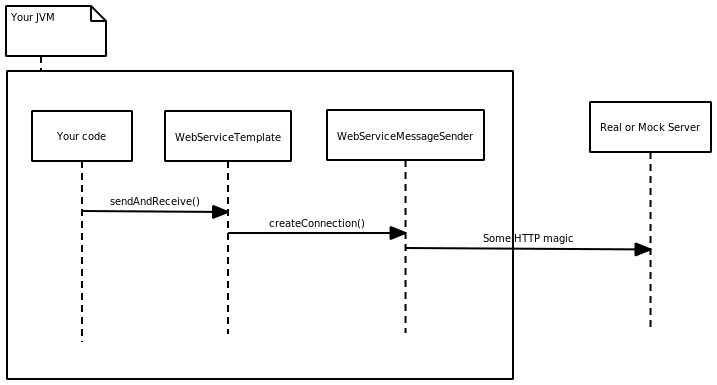 I have been looking for something in between, for something that would allow me to write functional tests using JUnit and would be able to run in the same JVM as the test. Unfortunately I have not been able to find anything similar.

That’s the reason why I have created Spring WS Test project. It’s quite simple and easy even though I had to spent lot of my evenings getting it into a publishable state.

Of course it has to decide, which file to use. By default a XPath expression is used to determine the resource name. In our example it is concat(local-name(//soapenv:Body/*[1]),'/default-response.xml'). It takes name of the payload (first soap:Body child) and uses it as a directory name. File “default-response.xml” from this directory is used as the mock response. Simple isn’t it?

Of course you can define more complicated XPaths, you can use XSLT templates to generate your responses, you can validate your requests etc. More details can be found in the documentation.

Now I am looking for some end-user feedback. So please, if you are using Spring WS on the client side do not hesitate and test it. It should be stable enough to be used although there might be a bug here and there.